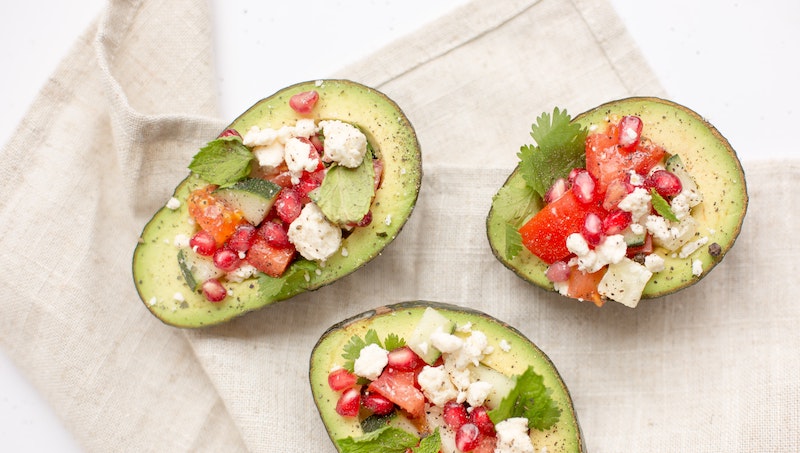 A healthy diet is one that helps maintain or improve health. It is important for the prevention of many chronic disease such as: obesity, heart disease, diabetes, and cancer.

A health diet involves consuming appropriate amounts all of the food groups, including an adequate amount of water. Nutrients can be obtained from many different food, thus a healthy diet may vary widely.

The WHO makes the following 6 recommendation with respect to both populations and individuals:
- Achieve an energy balance and a healthy weight
- Limit energy intake from total fats and shift fat consumption away from saturated fats to unsaturated fats and towards the elimination of trans-fatty acids
- Increase consumption of fruits and vegetables, legumes, whole grains and nuts
- Limit the intake of simple sugars
- Limit salt / sodium consumption from all sources and ensure that salt is iodized

Other recommendation include:
- Sufficient essential amino acids ("complete protein") to provide cellular replenishment and transport proteins. All essential amino acids are present in animals. A select few plants (such as soy and hemp) give all the essential acids. A combination of other plants may also provide all essential amino acids (except rice and beans which have limitations).
- Essential micronutrients such as vitamins and certain minerals.
- Avoiding directly poisonous (e.g. heavy metals) and carcinogenic (e.g. benzene) substances;
- Avoiding foods contaminated by human pathogens (e.g. E. coli, tapeworm eggs).

The WHO recommends a minimum of 400g of fruit and vegetables per day. This groups excludes potatoes and other starchy tubers. Fruits and vegetables also prevent several micronutrient deficiencies.

While a moderate amount of salt is required for health, a high salt diet can have detrimental effects on blood pressure.

The WHO estimates that 2.7 million deaths are attributable to a diet low in fruit and vegetable every year.Globally it is estimated to cause about 19% of gastrointestinal cancer, 31% of ischaemic heart disease, and 11% of strokes.Thus making it one of the leading preventable causes of death worldwide.

Some claim that food additives, such as artificial sweeteners, colorants, preserving agents, and flavorings may cause health problems such as increasing the risk of cancer or ADHD.

Several recent studies have also shown that artificial sweeteners, such as Aspartame, may increase risks of obesity. A study led by Sharon P. Fowler found that drinking two cans of either regular or diet soft-drink a day increased the risk of becoming overweight or obese by 50%.

There is a lot of controversy around the use of Aspartame alone, and one test has shown that the Aspartame in Diet Coke "decomposes into formaldehyde, methyl alcohol, formic acid, diketopiperazine and other toxins. In a study on 7 monkeys 5 had grand mal seizures and one died, a casualty rate of 86%." It has also been shown in studies that Diet Coke may cause 92 symptoms listed by the FDA, one of them being Death. However, Aspartame has not been actually "proven" to be dangerous in any way, and the makers of it claim that it is one of the safest artificial sweeteners, and that it has been tested several times by their company.

Media coverage of mass-produced, processed, "snack" or "sweet" products directly marketed at children has worked to undermine policy efforts to improve eating habits. The main problem with such advertisements for foods is that alcohol and fast food are portrayed as offering excitement, escape and instant gratification.

Particularly within the last five years government agencies have attempted to combat the amount and method of media coverage lavished upon "junk" foods. Governments also put pressure on businesses to promote healthful food options, consider limiting the availability of junk food in state-run schools, and tax foods that are high in fat. Most recently, the United Kingdom removed the rights for McDonald's to advertise its products as the majority of the foods that were seen to have low nutrient values were aimed at children under the guise of the "Happy Meal". The British Heart Foundation released its own government-funded advertisements, labeled "Food4Thought", which were targeted at children and adults displaying the gory nature of how fast food is generally constituted.

From a psychological perspective, a new healthy diet may be difficult to achieve for a person with poor eating habits. This may be due to tastes acquired in early adolescence and preferences for fatty foods. It may be easier for such a person to transition to a healthy diet if treats such as chocolate are allowed; sweets may act as mood stabilizers, which could help reinforce correct nutrient intake.

It is known that the experiences we have in childhood relating to consumption of food affect our perspective on food consumption in later life. From this, we are able to determine ourselves our limits of how much we will eat, as well as foods we will not eat - which can develop into eating disorders, such as anorexia, bulimia, or orthorexia This is also true with how we perceive the sizes of the meals or amounts of food we consume daily; people have different interpretations of small and large meals based on upbringing.

While plants, vegetables, and fruits are known to help reduce the incidence of chronic disease, the benefits on health posed by plant-based foods, as well as the percentage of which a diet needs to be plant based in order to have health benefits is unknown. Nevertheless, plant-based food diets in society and between nutritionist circles are linked to health and longevity, as well as contributing to lowering cholesterol, weight loss, and in some cases, stress reduction. Indeed, ideas of what counts as "healthy eating" have varied in different times and places, according to scientific advances in the field of nutrition, cultural fashions, religious proscriptions, or personal considerations.